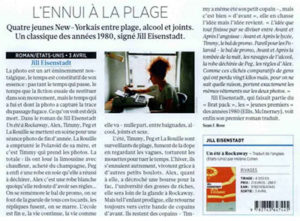 Thirty years after publishing From Rockaway, Jill Eisenstadt returns with a darkly funny new work of fiction that exposes a city and their family when they are most vulnerable. Swell introduces you to the Glassman family, who chooses to relocate after being at Ground Zero during 9/11. The family choses Rockaway, thinking they would be safe there. The catch? Their new ramshackle beachfront house in Rockaway, Queens is haunted! The Glassman’s are rocked when ninety-year-old Rose shows up after escaping an assisted living facility, and insisted she moves back in. Rose’s return causes a collective nervous breakdown for the family in this novel that will charm and surprise you on every page! Eisenstadt explores the theme of safety in Swell and how important our quest to feel safe is, even though it is often merely an illusion. Read more…

It's good day when you get to read @jilleisenstadt 's first book in 30 years 🙌 she's back and better than ever with #Swell. Who else is reading this one?

A post shared by The Public Library Podcast (@thepubliclibrarypodcast) on Jul 17, 2017 at 9:25am PDT

The Common
Our Quest for Safety: an interview with Jill Eisenstadt

Jill Eisenstadt’s latest book, Swell, was released to acclaim in June—Rolling Stone called it “the literary comeback of the year,”—thirty years after her debut novel with the same setting, From Rockaway. In Swell, Eisenstadt tells the story of the Glassmans, a family of four who relocate from Tribeca to Rockaway, New York, in the aftermath of 9/11. The house they move into, like the Glassmans themselves, comes with a fraught history; their confrontation with this past reaches a crescendo that will make readers rethink what it means to love thy neighbor. Read more…

Jill Eisenstadt’s 1987 and 1991 novels “From Rockaway” and “Kiss Out” earned her a bright literary reputation and following, even membership in the media-manufactured “brat pack” of writers including Bret Easton Ellis and Donna Tartt. Read more…

“The water was up to the second floor,” Jill Eisenstadt is saying. She’s standing in front of her father’s house just off the beach in Rockaway, and talking about the night of Hurricane Sandy. “This is the house in the book, although I moved it.” In real life, the hurricane damage has been put right, and is somewhere where you’d be happy to spend a summer weekend. In Eisenstadt’s new novel Swell, the house is a beat-up old thing, “and I set it on 126th, because that’s where the Boardwalk starts. I was trying to think of Rockaway, how it’s kind of a character in the book — it’s got a lot of scars, and it’s haunted.” Read more…

New York Times
What to Cook This Weekend

Jill Eisenstadt’s back with a new novel, “Swell,” out of Queens where her first one was set, and if you read it down the beach at Fort Tilden, so much the better, but you’ll get the scent and flavor of Rockaway even if you’re in a hammock outside of Seattle, and that is just great. That is the joy of it, right there. Read more…

In the wake of 9/11, a Jewish man and his non-Jewish wife move their family from Manhattan’s Tribeca to a house in Rockaway, Queens, that his father buys them on the condition that the father gets to live there — oh, and that the wife converts to Judaism. Also, the house is haunted. Sounds crazy, no? Read more…

On this week’s podcast, Retica talks about “A Flag Worth Dying For”; Jill Eisenstadt talks about her new novel, “Swell”; Alexandra Alter and… Listen here…

Literary Hub
Jill Eisenstadt And Darcey Steinke On Writing, Motherhood, and Brooklyn
The Author Of Swell In Conversation With An Old Friend…

I have known Jill Eisenstadt for nearly 30 years. We met in the early 1990s when we were both young novelists living in a Brooklyn that was not yet a literary mecca. Her first novel From Rockaway, thrilled me with its unique sound-driven style and her uncanny feel for a variety of Brooklyn accents and points of view. That first book, in its feel for community, reminds me of Zadie Smith’s White Teeth. Her new book Swell, is a sort of soft sequel, that takes up some of the earlier storylines and adds new characters. Read more…

Thirty years ago, Eisenstadt published her first novel, From Rockaway, adapted from her Columbia MFA thesis. The book became a cult classic, and she and her friends (Bret Easton Ellis, Jay McInerney, and Tama Janowitz ’77BC, ’86SOA) became known as the “literary brat pack.” Read more…

The Forward
The Tony Awards And More To Read, Watch, And Do This Weekend

New books! Hurrah. Rachel Kadish’s “The Weight of Ink,” Anthony Horowitz’s “The Magpie Murders,” Wendy Pearlman’s “We Crossed a Bridge and it Trembled: Voices From Syria,” and Jill Eisenstadt’s “Swell” should all be good picks. Read more…

“Comic, dark…layered with ghosts and guilt and demons. It plays with our notions of heroes and heroism, and jabs at our one-dimensional instinct to deify in the face of tragedy.” ―Casey Barrett, Village Voice

New York Times
Have a Martini

Rolling Stone
Culture Index: Seven things you need to check out this week

“…call it the literary comeback of the year.”

New York Post
The 29 best books of the summer

Harper’s Bazaar
Sex, Drugs, and Bestsellers: The Legend of the Literary Brat Pack

Contact Jill to learn more about working with her.